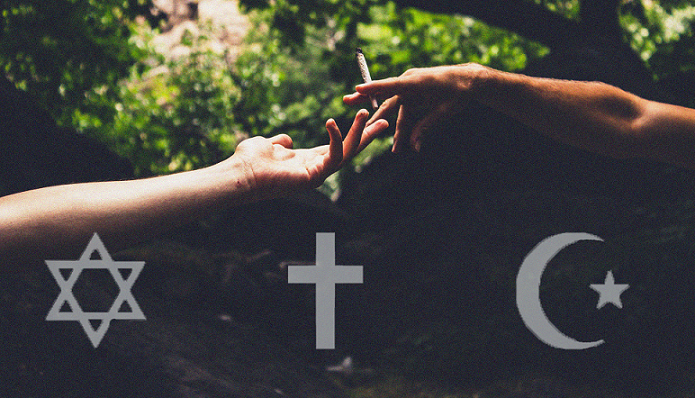 In this article we will find out what the major monotheistic religions think about the consumption of cannabis.

It is not clear how cannabis and Judaism relate. The passage [6]Genesis 1;29 says that God gives every herb bearing seeds to man. Although the Talmud refers to hemp cultivation, it focuses more on its textile use than its psychoactive effects. There are still questions about medical cannabis’ use in Jewish tradition. Maimonides, a prominent Torah scholar, advocated cannabis oil for treating respiratory conditions.

Liberal Jewish communities are also open to cannabis use. The subject is still up for debate even among Orthodox Rabbis. Some have declared marijuana illegal, while others have made medical cannabis legal. Judaism tends to be more cerebral than other Abrahamic religions. Prayer in Judaism is more about self-contemplation and judgment. Some believe that weed may have a spiritual purpose if used to enhance awareness and self-reflection.

The status of cannabis in Judaism will continue to be debated, just like many other things that are not explicitly prohibited or explicitly allowed. The trend is towards Marijuana being accepted for medical purposes. It is less accepted for recreational use.

Christianism and Cannabis use :

Despite the positive pot-smoking vibes of Jesus Christ, cannabis’ status in Christianity is complicated and murky. Christianity and Judaism have a lot in common regarding cannabis because of their shared holy writings. The Old Testament or Hebrew Bible mentions “kanesh Bosm” as a plant. Kanesh Bosm was one the plants that were used in the holy oil. ([8]Exodus 30, 22-26). This is most likely a reference to the Calamus plant, according to classical scholars. Others have suggested that the translation error could be an oversight and that Kanesh Bosm could refer to cannabis. Some even speculate that cannabis’ medicinal properties could be responsible for some of the healing miracles Jesus Christ is credited with.

Many Christian churches have long discouraged cannabis use. A group of Christian churches produced the famous anti-cannabis propaganda movie Reefer Madness. Some Protestant churches, especially Baptists, have opposed medical weed. The Pope has also spoken out against it. Other Protestant churches in America have allowed medical cannabis to be used. These churches include Methodist, Episcopal, and United Churches.

Some people draw parallels between the biblical treatment for alcohol and Marijuana in the debate over recreational and medical use. Paul encourages the “little wine” consumption, which is a sacrament that includes Christ’s blood. ([10]1 Timothy 5:23). The Bible also forbids drunkenness. Is cannabis acceptable? It would be illegal to hover in orbit. However, the Bible does not seem to prohibit you from smoking marijuana if it is therapeutic.

There is much debate about whether cannabis consumption should be considered haram (forbidden), or Halal (permitted) by Islam. Although cannabis is not prohibited by the Qur’an (the Word of Allah), it is not recommended. Many Muslims believe that cannabis is included in the Hadith (sayings by Muhammad). This would not apply to non-intoxicating cannabis components, such as CBD. Therefore, cannabis varieties without THC can be considered halal.

A possible exception is made for medical use. The Qur’an commands us to take care of our bodies. Health considerations could go beyond Islam’s general prohibition against intoxicants. Painkillers, for example, are not considered haram despite the fact that many of them can be intoxicating. Similar to the above, medical cannabis may be acceptable when prescribed by a doctor. Arab doctors refer to medical marijuana as far back as 100 BC. Modern times have seen Imam Mohammad Elahi [11] stating that smoking cannabis is allowed if it is the only option for a medical condition as prescribed by doctors.

Picture from Morocco, the biggest Cannabis resin producer in the world, read more about cannabis production in the world.