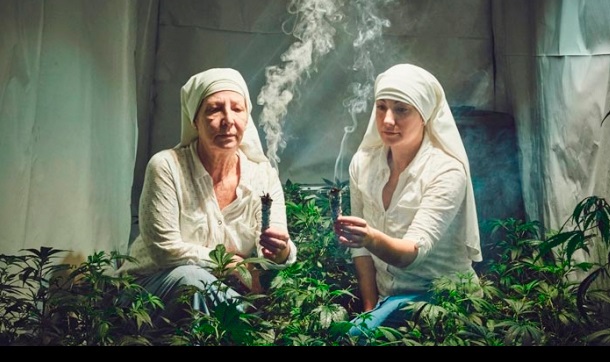 Surely you have come across a video or photo of nuns smoking cannabis.

In 2011, Kate Meeusen started her business with just 12 cannabis plants. Today, she runs Sisters of the Valley, a business that makes over $1 million each year selling cannabis. What’s most amazing is that Kate Meeusen has the appearance of a nun. This “nun” and her “sisters” grow cannabis and make CBD products from their community gardens, in Merced, California.

Sister of the valley, are they really nuns?

Despite the group’s nickname, “Sisters of the Valley”, the sisters have declared in several interviews that they are in no way affiliated with the Catholic Church.

“We do things that are spiritual but none of us are associated with any particular religion”.

Sister Kate explained in one of her many interviews: “Religions sell words but we want to do much more than that”.

But what about their dress code ?

In terms of dress, most of the sisters wear the monastic habit. This habit is not obligatory, it is a choice that the person makes within the group. As Sister Kate said so well in the RTBF article: “Through our clothing we show respect to these plants that have been denied for more than 50 years. But in reality, it is mostly so that people can easily identify their community.

The beginning of the weed business

In 2011, Kate Meeusen came up with the idea of planting 12 cannabis plants in her community gardens. She and her sisters had to fight the authorities and even the drug mafia, who wouldn’t let them have a place in the market. “We don’t like the rule of the white man in authority,” says Sister Kate. Also, people in the agricultural community “are slow to adapt to new ideas. People are stuck in the 1950s.” Over the years, they haven’t given up and their plantations have become very large. Today, their company makes a profit of $1.1 million each year.

They fought against institutions and local banditry

Of course, the nuns’ intentions are not to make the population completely stoned. Their plants are used to make products based on CBD, the non-psychotropic molecule in cannabis. With their oils, they are developing treatments, primarily to cure drug addicts. “We have a 100% success rate, when it comes to treating addictions. It is true that our test panel is not very large, we work with 8 people who are addicted to either alcohol, tobacco or methamphetamines. And all of them are getting better,” says Sister Kate.

They treat addictions with CBD oil

Their CBD products also help soothe epileptics and cancer sufferers. “It’s a wonderful healing plant. Little by little, the world is opening up to the idea of using cannabis as medicine, rather than seeing it as a dangerous drug.”

“Breaking Habits,” :  A documentary released in 2018 about Sister Kate’s life and journey.

Directed by Rob Ryan, this documentary follows the life path of Christine Meeusen, a businesswoman converted into a cannabis grower. In order to link her two passions, she starts a medical marijuana business. Betrayed by her husband after 17 years together, she decides to flee without a penny with her three young children.

The film tells the story of how this daring woman, Sister Kate, set up her business called Sisters of the Valley, a company that manufactures and sells medical cannabis products and whose employees are nuns. Of course, problems and abuses are never far away.